Although the real sector, which met frequently with the Central Bank and bank managers to overcome the financing bottleneck, did not receive very satisfactory answers, the first step was taken to enable the Credit Guarantee Fund (KGF) to reopen the credit taps in the upcoming period. With the President’s Decision published in the Official Gazette, the upper limit of the KGF guarantee was increased from 500 billion liras to 1 trillion liras. In other words, the total amount of loans that KGF can provide as surety has been increased from 500 billion liras to 1 trillion liras. As of August 5, KGF’s surety volume is 580 billion liras, and the loan amount is 687 billion liras.

The amendment to the Decision Regarding the Treasury Support Provided to Credit Guarantee Institutions entered into force after being published in the Official Gazette dated 13 August. The total balance amount of the guarantees given by the Credit Guarantee Fund (KGF) has been indexed to 10 times the limit stipulated in the provisional Article 20 of the Law on Public Finance and Debt Management No.

Provisional Article 20 of 4749 authorized the Minister of Treasury and Finance to transfer cash resources of up to 100 billion liras to credit guarantee institutions. With this change, the guarantee limit that KGF can give was limited to 10 times the amount of resources to be transferred to it. In the calculation of the balance amount, the exchange rates on the date of approval by KGF for the guarantees given for foreign currency loans will be taken as basis. 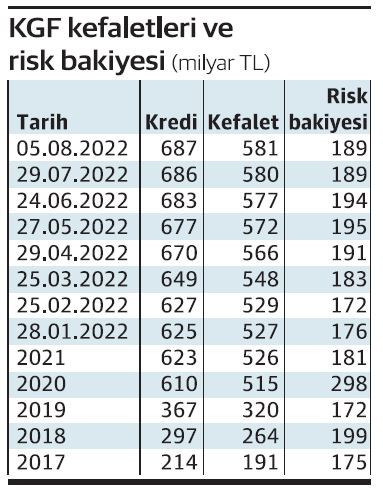 The upper limit has been indexed to the law

Before this change, the total balance amounts of the guarantees that could be given by the KGF of the regulation were not directly indexed to the law numbered 4749. In clause b of paragraph 2 of article 4 of the regulation, it was foreseen that the total balance amount of KGF guarantees should not exceed 500 billion liras, and the amount to be transferred from the Treasury to KGF would not exceed 50 billion liras. With the new regulation, the figures containing the limit in the 4th article of the regulation have been removed. Credit volume has increased by 64 billion liras since the beginning of the year. With the guarantee of KGF, whose surety limit was increased to 1 trillion liras, the credit volume extended since the beginning of the year increased by 64 billion liras.