Monetary tightening with macroprudential measures taken by the Central Bank, the Banking Regulation and Supervision Agency (BRSA) and the Ministry of Treasury and Finance, by keeping the Central Bank’s policy rate constant at 14 percent, is also evident in consumer loans. In the text of the last Monetary Policy Committee (MPC) meeting of the Central Bank, the credit channel was also included in macroprudential measures and it was announced that additional measures would be taken if necessary. In addition to the document that the consumers will not use in purchases such as foreign currency, gold, crypto assets, which are signed in consumer loan requests, a detailed explanation of where they will spend is now required. Even if the amount of consumer loan is 50 thousand liras, banks even demand 3-month signed payroll from consumers who are not salary customers, in line with suggestions from regulatory institutions. In fact, banks take a signed promise that the new resource to be obtained from their customers will not be spent on foreign currency, gold or crypto assets in overdraft account (KMH) limit increases.

Payroll with stamped signature for the last three months The loosening monetary policy and falling loan rates in the pandemic caused consumer loans to be directed to some investment instruments. The economy management also frequently made statements that the loans were not transferred to the right channels. Thereupon, after the BRSA’s announcements regarding the strict monitoring of where the loans are transferred, banks started to have both commercial and individual customers sign a document when they extended loans. Customers who have been using consumer loans for a while promise banks that they will not buy foreign currency, gold or crypto assets with this resource. However, in the new period, banks have started to keep the business a little tighter. While the bank requested a stamped and signed payroll for the last three months from an individual customer who wanted to take a consumer loan of 50 thousand TL from a bank, it also demanded that the signature circular of the signatory be attached to the documents. In addition, the bank was requested to notify the bank in detail about what the consumer loan was requested for and the reason for it.

More interestingly, this situation, which banks apply in general purpose loans, is also experienced in limit increases in overdraft accounts. When a limit increase is requested in the KMH account from the bank where he is a salary customer, the approval forms include the promise that ‘I will not buy foreign currency, gold, crypto money’, which is signed just as when taking a consumer loan. Previously, banks did not demand such a document for KMH limit increases.

Central Bank Governor Şahap Kavcıoğlu drew particular attention to loans in his post-MPK Inflation Report presentation. Kavcıoğlu stated that as a result of the measures taken, a slowdown has been observed in the growth rates of commercial and individual loans in the last period, “Again, with the steps taken since the second half of 2021, the share of consumer loans in all loans decreased significantly. The effects of the decisions taken will be closely monitored and additional measures will be taken when necessary against extraordinary developments in commercial and individual loans. 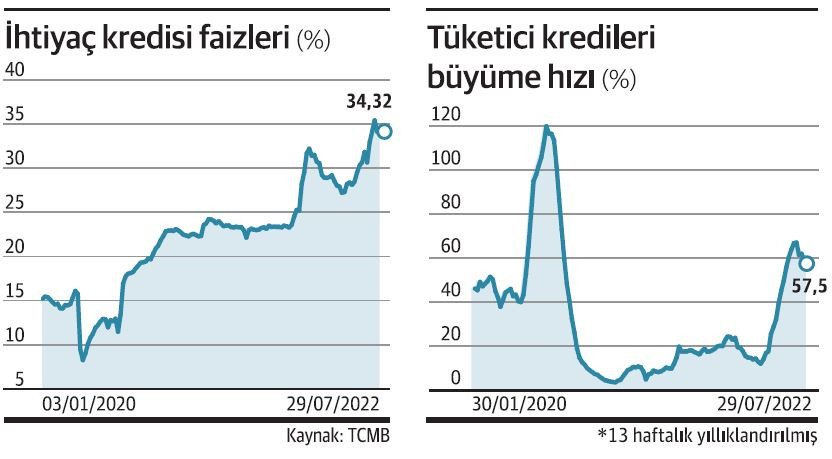