THE mystery surrounding bodies found in Lake Meade has deepened after another set of remains was discovered this weekend.

The National Park Service (NPS) announced on Saturday that a fourth set of human skeletal remains were found at the reservoir.

Rangers were contacted at about 11.15am PST on Saturday, August 6.

“The Clark County Medical Examiner has been contacted to determine the cause of death.” 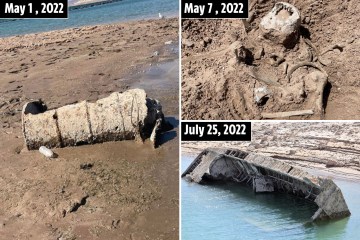 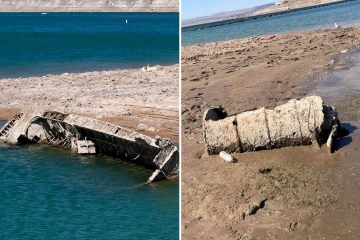 An investigation remains underway and no additional information was released at the time of the announcement.

Lake Mead’s sinking waters and a megadrought resulted in the discovery of the four sets of remains in the late stages of decomposition.

The most recent finding comes after three other bodies were found on May 1, May 7, and July 26 of this year.

And officials recently determined that the victim whose remains were found inside a barrel with a gunshot wound on May 1 died of homicide.

Investigators are now working intensely to extract DNA and learn more about the victims found in the reservoir, which spans Nevada and Arizona.

Despite time and evidence working against them, Clark County Coroner Melanie Rouse made major discoveries since the first set of remains was found on May 1.

Officials determined that this first victim died sometime in the mid-70s to early 80s, but this makes things a bit complicated.

“If you think about what the age of who your witnesses or anybody related to this case would be, many of them are getting older every day,” Las Vegas Metropolitan Police Lieutenant Jason Johansson told CNN.

“And they’re at an age where you have to worry, are they even alive?

“And so I would say that’s probably our biggest concern right now.”

Compounding the mystery is the fact that no DNA has been uncovered.

If DNA is found, it can be sent to the FBI, which will then assist with the investigation.

Nicknamed the Hemenway Harbor Doe, the coroner’s office determined that the barrel-bound body was that of a murder victim, despite details surrounding their death being fuzzy.

“Anytime you have a body in a barrel, clearly there was somebody else involved,” Johansson said.

Despite the lack of evidence, local officials were able to determine the second victim, whose remains were uncovered on May 7, was between 23 and 37 years old, according to Rouse.

The manner of death for that victim is still under investigation.

Todd Kolod, who was three years old when his 22-year-old dad died, told 8 News Now’s I-Team, that he believes his father is the second victim.

He said his dad, Daniel Kolod, drowned in Callville Bay in 1958. and his remains were never found.

“With each clue, I always expect in my mind that it’s going to put us farther away from our goal, but consistently each clue is putting us closer, and this is like a bullseye,” Todd Kolod said last week.

The third set of remains is still in the early stages of the examination, according to Rouse.

The coroner’s office continues to examine each set of remains.

According to NASA’s Earth Observatory, water levels in Lake Mead have reached their lowest level since April 1937, when the reservoir was being filled for the first time.

Last month, a WWII vessel was discovered in the lake just weeks after two skeletons were found.

And one body was previously said to be linked to the mob, according to Lt Ray Spencer with the LVMPD.