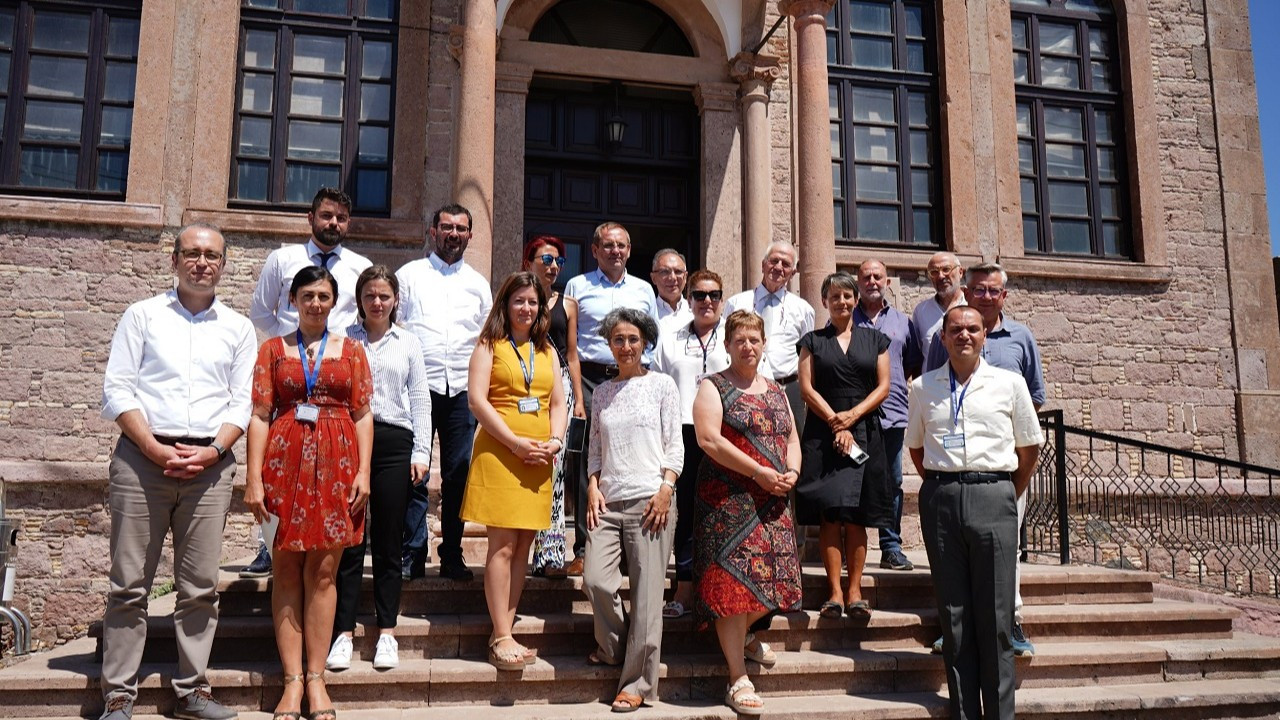 The UNESCO Working Group of Ayvalık, which is on the Tentative List of the UNESCO World Heritage List, decided to celebrate the ‘UNESCO Olive Tree Day’ jointly in Ayvalık and Lesbos for the first time in the world.

The offer of Ambassador Gürcan Türkoğlu, who served as a representative to UNESCO, was widely accepted and Ayvalık Mayor Mesut Ergin decided to make this organization a partnership with Midilli. If this work process is fruitful, on November 26, for the first time in the world, 2 local governments will plant an olive tree wrapped in the UNESCO flag on both land plots, witnessed by UNESCO observers.

The UNESCO Working Group, consisting of all volunteers, reviewed the inventory of the candidate industrial heritage in Ayvalık during its first workshop held at the Ayvalık Cunda Bekir Çoşkun Library. The decision that came out of various opinions was agreed to turn an industrial property into a workshop-museum in order to raise awareness. Producer Mustafa Kürşat, who still has the most functional olive museum in Turkey, undertook to provide technical and know-how support in this regard. Entrepreneur and olive growing expert Halil Sucu will contribute to the repair of the pieces in this Museum.

Cultural historian Dr. Serhan Ada suggested the establishment of a “social network” with nearly 20 distinguished world universities, which established a Summer School in Ayvalık, in order to reflect Ayvalık’s rich human presence of 20 nationalities in the UNESCO file, and this proposal was accepted.

Civil society activist Defne Koryürek drew attention to the UNESCO Site Management Condition and demanded that efforts be focused on preventing olive tree massacres in the name of construction. Mehmet Gönenç, the mayor of the period, who made Bergama to be included in the UNESCO List in 2.5 years with a record speed in Turkey, evaluated this event by exemplifying it from Bergama as follows.

In this regard, the local government comes to the fore with the arrangements made by the central government, it ties your hands and arms. In Bergama, we saw that the only way to overcome this problem was civil society solidarity and we implemented it. In this way, Bergama is still protected. Therefore, communication between stakeholders is of great importance.

Ayvalık Mayor Mesut Ergin noted that this cocoon-based civil society solidarity will also be implemented in Ayvalık and that the UNESCO File is a special priority for him. In this context, Ergin stated that in order to prevent olive massacres, the olive farm licenses obtained for residential purposes in the middle of the olive grove will be taken into a special tracking system and if necessary, a demolition decision will be made. This special tracking system of Ergin will be a first in the field of zoning in Turkey.

One of the facilitators of the Ida-Madra Geopark, geographer Prof. Dr. Abdullah Soykan pointed out that the existence of this geopark is a great advantage for the Ayvalık UNESCO File and suggested that this geopark information be added to the file. The Ida Madra Geopark will be approved for entry into the UNESCO final bid this September. Thus, Turkey will experience the first application that brings together two eco-systems under the umbrella of UNESCO.

Site Management Specialist Dr. Yaşagül Ekinci, who prepared the Selimiye / Bergama and Diyarbakır UNESCO Files in Turkey, said that this is a first in Ayvalık, and that he is proud of this and that they will insist on its continuity.

The decision of the Ayvalık UNESCO Working Group to open the Kürşat Olive Oil Museum as a UNESCO event was another of the most concrete decisions of this workshop.

As Ayvalık, a working group consisting of local and volunteers for the UNESCO World Heritage List is a first in Turkey.