This equation does not only affect the yield of an interest-bearing instrument. For example, if you want to invest in a stock, you will come across it here as well. At least with its reflection on balance sheet items.

When we compare the total balance sheet and income statement data of 195 companies that have submitted their balance sheets and income statements to the Public Disclosure Platform so far with the previous 5 years of the same period on dollar basis, it is impossible not to notice how clear this effect is. Reaching the highest operating profitability of the last 5 years in dollar terms, the listed companies are at a level of profitability close to 4 times that of two years ago in terms of total profitability. The operating profit margin has increased from 4.78 percent to 10 percent, the net profit margin has increased from 6.53 percent to 17.47 percent, and the return on equity has increased from 3.97 percent to 16.45 percent.

If we want to see the effect of the interest-inflation model on the companies’ side, here is the best example. Because the 2018/06 period was a period in which the Central Bank determined the policy rate at 17.75 percent, while the official CPI figure was announced as 15.39 percent annually. While the CPI fell to 12.62 percent over the years, the interest rate was reduced to 8.25 percent with cuts above the expectations. This was the period when the balances began to change on the front of companies, literally. Although there was a period of sharp interest rate hikes in the second half of 2020 and the first months of 2021, and a period of positive real interest rates again, the link between the subsequent interest rate cuts and the astronomically increasing inflation was broken. This resulted in a period that made outsourcing much more attractive for companies, and the value of the goods in hand as they stand. For this reason, it created a period in which companies increasingly finance their growth with very cheap external resources, namely debt.

WHY IS THE EXCHANGE STILL CHEAP?

For listed companies, the period with high profitability and low costs still continues. For this reason, the expectation that very high profitability will continue in the coming periods is also expressed on the analysts’ side. This is a reason that will make Borsa İstanbul even cheaper in each new balance sheet period. In other words, in companies that are solid, profitable, increase turnover and asset growth in BIST and do not have speculative boards, any price we see now may not be expensive. 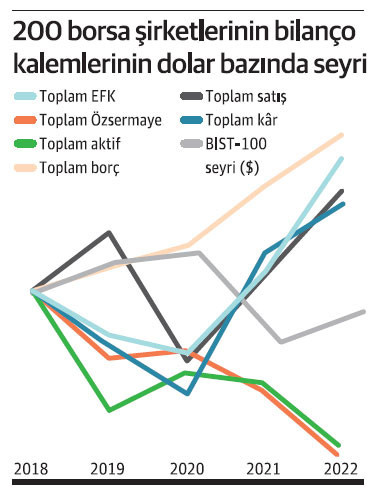