TERRIFYING images have revealed a shark just yards away from swimmers on a US beach.

The shark sighting took place on Saturday at Pawleys Island in South Carolina.

The footage, taken by Jennifer Barwick, revealed two fins were sticking up out of the water near the break.

Barwick was enjoying a beach day when she unexpectedly “made a new friend,” according to WCBD News 2.

“He was feeding on bait fish,” she said, referring to the shark.

“Needless to say, we got out of the water fast. Figured I would stay out his way.” 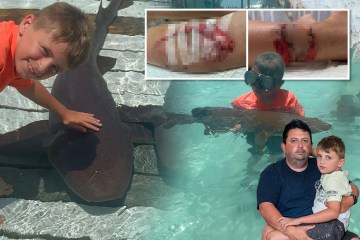 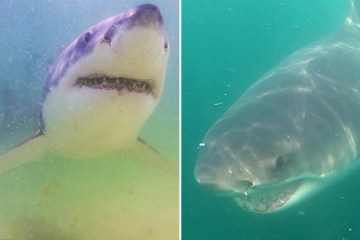 The new images come after a rise in shark attacks across the country and after at least 10 great white sharks have been spotted lurking off the US coast in two days.

Several terrifying great whites were seen on the Sharktivity Map’s sonar system over the weekend swimming only yards from Massachusetts beaches.

Many of the beasts were identifiable sharks on the system, which has tagged several of the predators who arrive in US waters during the summer months.

The huge great white known as Terp was caught swimming around a buoy off the shore of the Cape on Saturday.

Meanwhile, horrifying images show a nine-foot sand tiger shark that washed up along the US coastline last week.

The sighting of the beast with “intimidating teeth” comes after at least six shark attacks were reported along one stretch of coast, all within weeks.

A man said he found the shark around 7am on July 28 in Longport, New Jersey.

He shared photos of the massive beast and said he called the police, who brought in a truck to remove the giant shark.

“It was pretty easy to locate, considering it was huge,” the unidentified man told the Philly Voice.

“I just walked over and noticed that one side of the shark looked a bit more gruesome.”

One of the photos obtained by the Voice shows the shark had a large gash across its belly, exposing its organs.

“There had to be about 20 birds eating some of the remains that were to the side of the shark,” the man said.

Several marine biologists told the Voice that the carcass was a sand tiger or grey nurse shark.

A spokesperson for the National Oceanic and Atmospheric Administration Fisheries said that these sharks are common in the northeastern United States, and New Jersey.

None of the shark attacks in the tri-state this summer have been fatal.

The first was on June 30, when a man in his 50s was bitten on the right foot while swimming in Jones Beach in Nassau County’s Long Island.

Shawn Donnelly, 41, was knocked off his surfboard when a sand tiger shark attacked off the coast of Smith Point Beach on July 13.

A 49-year-old tourist from Arizona was attacked by a shark at Seaview Beach on the same day.

John Mullins, 17, who was participating in lifeguard training, was attacked by a shark on July 7.

Lifeguard Zach Gallo, 33, was also bitten while he was doing training exercises at Smith Point Beach on July 3.

Ans last month, a great white shark carcass washed up on a beach in Quogue Village. It was seven- to eight-feet long.