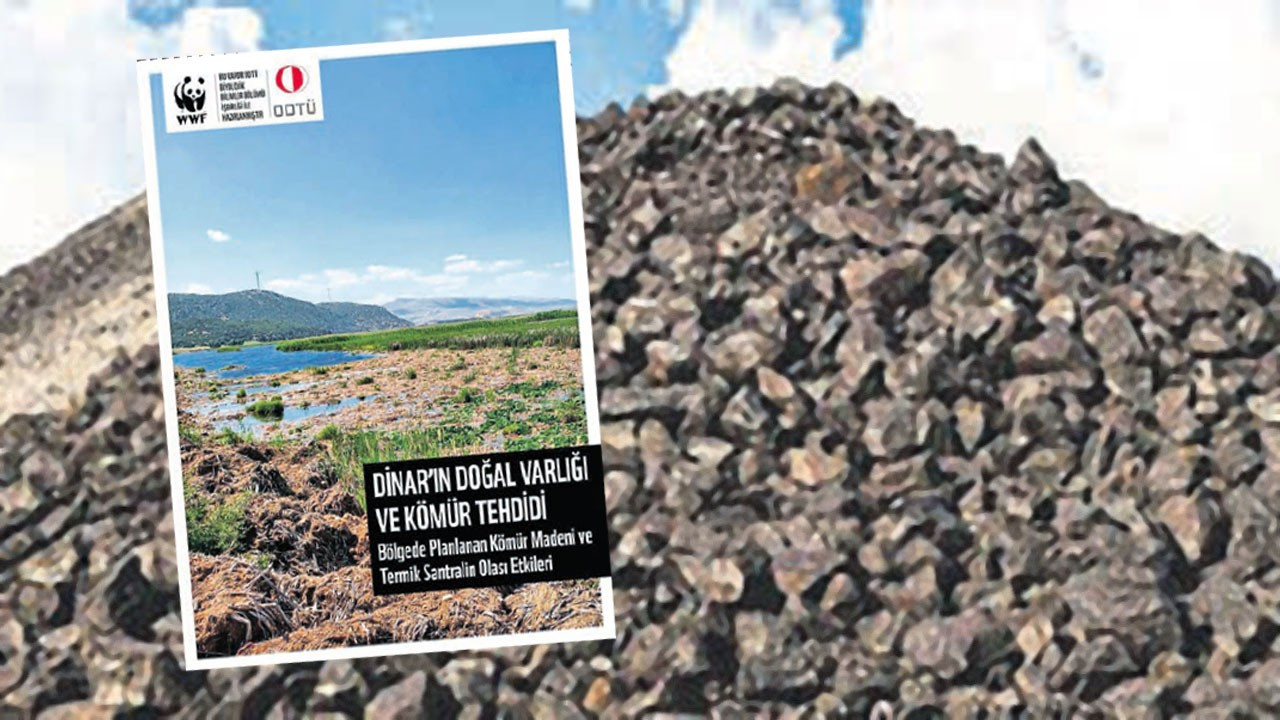 In the fight against climate change, steps towards exiting coal, which is the fossil fuel with the highest global heating and pollution factor, gained momentum around the world. Turkey, which has set a net zero emission target in 2053, is planning new mining and power plant investments, and continues to look for ways to use coal in electricity generation, aside from getting out of coal.

One of the coal power plant and mining operation projects is planned to be established in the Dinar district of Afyon. Moreover, there are Karakuyu Marshes, which feed the Büyük Menderes Basin, one of the largest and most fertile agricultural lands in our country, and have the status of Qualified Nature Conservation Area.

WWF-Turkey (World Wildlife Fund) shared the report “The Natural Presence of Dinar and the Coal Threat: Possible Impacts of the Planned Coal Mine and Thermal Power Plant in the Region” with the public. The study draws attention to the pressure on the biodiversity and ecosystem services of the coal mine and 500 MW thermal power plant planned to evaluate the coal reserve discovered in the Dombayovası region.

Middle East Technical University, Biology Department Lecturer Prof. Dr. The findings in the report prepared by Cemal Can Bilgin point out that the unaccounted costs of mining and thermal power plant operations are much higher than the economic dimension of investing in coal.

“The region cannot handle this burden”

prof. Dr. C. Can Bilgin expressed the following views on the subject: “Dinar hosts a nationally important wetland and ecosystem, especially the Karakuyu Marshes. With the services it provides and the species it hosts, it seems that this natural asset is already under pressure due to faulty approaches and practices in the wetland management plan. The region cannot bear the additional burden of the coal mine and thermal power plant.”

Tanyeli Sabuncu, Climate and Energy Program Manager of WWF-Turkey (World Wildlife Fund), said, “This report shows us that the top of the ground is at least as valuable as the bottom. It is clear that there is a need for a comprehensive transformation in the energy sector in Turkey in line with the net zero target for 2053. While planning investments, it is necessary to consider not only the investment costs and returns, but also the ecological, economic and social effects in the region. Our study on the Dinar example shows that electricity generation from coal, even from domestic sources, is not economical. Because the value of the natural asset to be sacrificed for the extraction and burning of coal is much higher than the gain to be obtained. Considering the health effects that will arise, the bill increases even more.”

Some of the prominent figures and findings in the report are as follows:

* A total of 138 different bird species have been recorded in the Karakuyu Reeds. The wetland, which is also home to the Pasbaş Patka duck, whose national status is in danger, cannot withstand the pollution and water use pressure that will be created by the coal mine and thermal power plant.

* With the ecosystem services valuation approach, the annual value of drinking water, agricultural irrigation, carbon sequestration and recreational services from 11 services provided by Karakuyu Marshes is more than 5.7 million Euros.

* Depending on the technology to be used in the power plant, additional water may be required at the rate of 8% or 27% of the current water use of Karakuyu. Another report titled “Overcoming the Contradiction: Turkey’s Green Revolution and New Coal Investment Plans”, published in March by WWF-Turkey and the Sustainable Economics and Finance Research Association, has a huge cost to the public budget. He drew attention to the economic feasibility of the thermal power plant and its cost to the public budget. According to this;

* Considering the externalities such as carbon price, health cost and loss of agricultural production, the burden of the power plant on public finances: 642 million to 1.4 billion Euros

* Time required for the power plant to make a profit after commissioning: 18 years

* If the power plant is implemented with 90% carbon capture technology, which is the only alternative that is compatible with the net zero target, the loss will be incurred at the end of its 30-year operational life: 230 million Euros.