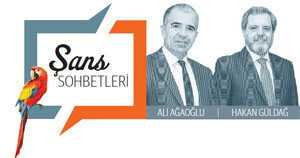 Economist Ali Ağaoğlu and journalist Hakan Güldağ discussed the effects of the Central Bank’s lowering of the interest rate by one point to 13 percent in this week’s Chance Talks. Noting that the difficulties in accessing credit continue, the duo reminded the words of an industrialist, “The real sector, too, took its foot off the gas, put it on the brake, it is waiting”, and drew attention to the reproaches of some businesses that “there are tendencies towards not getting orders”.

In the conversation, in which it was stated that the exchanges among the firms were weakening, the meaning of a banker’s statement, “I am most afraid of a sudden stop in the economy” was questioned. While it is stated that the contraction in the European market will have major effects for Turkey, “Dollar/TL is tried to be kept constant with the Central Bank’s full-field press. After a while, the exporter will say ‘loose the dry a little more’. If it cannot find financing, its production will become more difficult,” it said.

Guldag: The Central Bank lowered the policy rate by another 100 basis points to 13… I did not find a rational step…

Ağaoğlu: A rational policy was not being followed anyway… So it didn’t come as a surprise to me. Anyway, let me listen to your comment.

Guldag: We have become a country where everything can happen at any moment. It is definitely a decision that the markets did not expect. It’s hard to explain. Let me not do the humor now. But let me tell you that we have aged well because we are ‘one year older’. I told a banker, whose mind I trust, and who has an academic background, that I could not explain it with rational concepts and asked his comment. “But they themselves think they’re acting rationally,” he said. He counted three or four reasons: “After this hour, it is already difficult to reject the discourse of lowering interest rates. Therefore, they want to keep the discourse of lowering interest rates politically strong. Secondly, they are receiving negative signals about growth. “Growth is slow, loan interest is high,” and the ground was laid for this. In my opinion, the President is not surprised here. He has been saying ‘growth and employment’ from the very beginning. Third, they may have been informed that inflation will decrease, albeit slightly, in August or the following month. Then this month is a good time to go down, to say, ‘We have reduced the interest rate, we have reduced the inflation.’ Likewise, it is clear that there are some opportunities in foreign currency. If we want to create the perception of ‘we will reduce our foreign currency income, we will also reduce it,’ and if a step will be taken for it, it was time. We understand that it was thought that we could control it through the back door.” Then I was going to ask what will happen to exchange rates, inflation, CDS’s going up. He said, “They don’t care much, the priority is growth and therefore employment.”

Guldag: I also asked a teacher who knows the Central Bank very well. ‘Do you think the slowdown signals made this decision?’ “Slowing signals are getting stronger, but I was actually expecting a ‘U’ turn in the loan. This discount decision doesn’t go anywhere. What will it matter if he gets a loan with 24 interest rates instead of 25 when he lowers 1 point? Is it worth playing CDSs and exchange rates that much? I think the Center The statements written by the Bank as justification are funny,” he said.

Ağaoğlu: I am listening to you…

Guldag: In our previous conversation, we drew attention to the fact that the Central Bank has taken its foot off the gas and the problem of access to finance has increased. Recalling our conversation, an industrialist said, “The real sector also took its foot off the gas, put it on the brake, and waited.” Our banker friend, whom I just mentioned, explained that they started to see a tendency not to take orders from businesses due to the lack of access to credit. He stated that there is a weakening in the exchanges of companies among themselves. And we are following the developments in this direction in the field. When I asked him, “Well, where will this work end?”, he replied, “I am most afraid of a sudden stop in the economy”.

Ağaoğlu: The weakening of exchange and trade between companies is actually a reflection of our earlier statement that “blood flow in payment systems should not stop”. We talked about the possibility of disruption in payment systems and a risk due to the difficulty in accessing credit. In the simplest terms, business people are afraid that they will not get their money. If he doesn’t get it, he won’t be able to pay himself. This takes us to the place we call the “sudden stop” that our banker friend pointed out. For this reason, we emphasized that the payment system should not be blocked. Such a risk has entered our agenda as never before. When I mentioned the possibility of disruption in payment systems, I did not pronounce the word ‘sudden stop’. We can hear it more often.

Guldag: If the volume of the market between banks and industrialists is 2, the volume between the industrialists or the business world may be 10. This is the domestic market, of course. You said last week that there might be problems on the export side as well.

Ağaoğlu: The European market is shrinking. As inflation increases, Euro interest rates increase, but Euro loses value. This has a very major effect for Turkey. Declining demand is increasing in Europe. Despite rising inflation and labor costs, there is a tight need for working capital. There are difficulties in financing exports. Dollar/TL is tried to be kept constant with the full field press of the Central Bank. Your exchange rate is fixed, there is a technically diminishing effect on other income or income increasing items. After a while, the exporter will say ‘loose the dry a little more’. If it cannot find financing, its production will be difficult.

Guldag: Our banker friend talked about 4 categories in accessing credit. says; “There is a group that moves in the direction desired by the government, that is, exports, brings in foreign currency, and passes to KKM, and they have easy access to public banks. This segment is one of the groups. A third group mainly imports and produces intermediate goods. This segment does not want to have access to credit anyway. There is also another segment whose business is not doing well for one reason or another. This segment is trying to raise its voice these days, I wonder if we are to see if something will come to save it.”

Ağaoğlu: These 4 categories, which our banker friend said, have always existed throughout history. But the real problem is that the old Eximbank is not around. Behind him, there is the fear that TL will go to foreign currency. This paranoia needs to be stopped. If the credits are not opened, the problem grows. Guldag: How?

Ağaoğlu: Finding credit is actually leverage. In other words, when you have 1 lira and you find a loan of 1 lira, you have a transaction volume of 2 liras. When you cannot find a loan of 1 lira, you will return to 1 again. But when one of you has a long collection period and you want to return cash to run your business today, you may not be able to find a person on the other side to pay you the cash. In this case, I’m afraid companies will be in a difficult situation. Then light will shine on the companies in the first group you mentioned. Maybe they will go and buy the others who are in dire straits. It will either go towards monopolization or more zombies.

Guldag: If you remember, in one of the meetings we attended, the sector representative said, “It’s not unprofitability, it’s cash flow that sinks us”.

Ağaoğlu: It is a definite rule. I buy it for 10 liras and sell it for 9 liras. I can do this consistently. Technically, I write to the loss section of my balance sheet all the time. Tesla is a good example of this. I’ll explain in detail sometime. Let’s say it costs 10 liras and sells it for 5 liras. As long as you can find 1 lira of funding for every 1 lira of loss, you can continue this loss indefinitely.

Guldag: We are in the process of intensive KKM return. The return of KKM of $30 billion in July and August is calculated, most of which is corporate and CBRT-sourced, of which $18 billion is in August. It is wondered whether there will be a high demand for foreign currency.

Ağaoğlu: I call it vintage. We are in the Currency Protected Deposits vintage month. While KKM was an instrument that would be finished quickly, as if it was produced as an intermediate solution, it has become a part of life. The need for CCM did not disappear, nor was there a major and significant improvement in the environment that led to its use.

That’s why it’s seen as a risk. People who want to continue KKM are really decreasing or they are hesitant to continue. For others, there is an atmosphere of uncertainty and insecurity, as if we can take a shot, see if we can get one, then renew it again. So what I call insecurity is the reflection on the business world you just said. Again, as the banker said, a sudden stop risk.

Natural gas will be decisive ‘weather’

Guldag: In oil, the fluctuating outlook continues due to the weak economic indicators and the news that the nuclear deal with Iran will be reached. Gas prices continue to rise in Europe. Gazprom warned that the price could exceed $4,000 during the winter months.

Ağaoğlu: I said I could see $85 if Iran enters the equation. I think that we will most likely make the $95 level as a base this year, towards the end of the year. It seems to go a little under and a little over. Such an equation that will be broken and spilled is little on the oil side for now. The natural gas side, on the other hand, is pregnant with surprises. One thing is very clear, the weather will be decisive. In other words, if the weather is mild, it will evolve to one place, if it is cold, it will evolve to another. If your stock is fragile, it means that you will be affected very clearly by this weather.

Possibility of ‘bad scenario’ increases in the euro

Guldag: Euro/Dollar parity, which is also important for our exports, is looking for direction in the 1.01-1.02 band. What kind of scenario do you think outweighs its impact on Turkey?

Ağaoğlu: The pair reached up to 1. He said that the interest rates in America will be increased slowly and came back to 1.03. As the Euro side cannot recover, the possibility of a bad scenario is still increasing. In other words, if it comes to 1 again and breaks, the second try will really go up to 0.92 – 96 Euro. The pair has reached 1.25, even from 1.17 a year ago to 1s today. So when you look at it, we’re talking about a 15 percent depreciation. A very serious loss of value for us. Decrease in the general amount of foreign currency directly in Euro basis. A Euro that will become even more worthless will become a more serious problem for Turkey.