Russia seems to be the winner of the war on the energy front so far due to the 35-40 percent increase in oil prices and the 10-fold increase in the European benchmark natural gas price in the last year. However, things may change with Europe’s orientation to alternative sources first and then independence from all fossil sources, primarily Russian origin, in line with the goals of green transition. According to some experts, the USA, which has tightened its ranks with the EU and increased its liquefied natural gas (LNG) exports to the region, may be the long-term winner of energy wars that cause livelihood crises all over the world. Gideon Rachman, who worked for The Economist for 15 years and is one of the foreign policy columnists of the Financial Times since 2006, states that in his article titled “The real winner of energy wars may be the USA”, Russia can squeeze the West in the short term with its dominance in the energy market, but there is no energy. He says his position as a superpower will be severely weakened in the long run.

Another FT writer, Chris Giles, who expressed the opinion that the European Union can avoid a deep and long recession in the especially feared winter of 2022, expresses the opinion that the savings measures taken at the level of mobilization and the support given to energy bills will alleviate the level of the recession. “There is no way to escape a broad-based recession in Europe,” Giles said, adding that cutting gas flow and oil shipments will be Russia’s last economic card, and that the 20 percent capacity of Nord Stream 1 is completely reset to Hungary, Slovakia, Czechia, Italy and Germany. He states that it will bring serious losses in GDPs in many EU economies, especially in the EU. 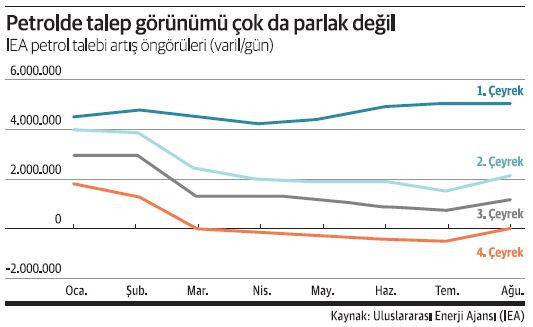 US LNG exports to UK and EU tripled

This resulted in US LNG producers increasing their exports to the European Union in the first four months of 2022 by 34 percent compared to last year. According to the US Energy Information Administration (EIA) estimates, 74 percent of the total US LNG exports in the January-April period went to Europe. The EU and the UK’s efforts to replenish stocks before the expected winter months tripled their LNG imports from the US, and the lion’s share of the US in the LNG imports of these two countries rose to 26 percent.

In addition, although oil giants such as Saudi Aramco have achieved record profitability with increasing prices, the steps to become independent from fossil fuels make it difficult to declare the winner of the war already.

The International Energy Agency (IEA), the US Energy Information Administration (EIA) and the Organization of Petroleum Exporting Countries (OPEC) have revised their short-term forecasts for oil demand growth over the past week. However, the revisions indicate that the increase in oil demand may not be very strong, and this is seen as a harbinger that an increase in Brent and WTI benchmark oil prices will not be easy, according to experts. The IEA is the only organization out of the three to revise its forecasts upwards. The IEA increased its oil demand increase forecast for 2022 by 380 thousand barrels to 2.1 million barrels/day. OPEC, on the other hand, lowered its forecast by 260 thousand barrels to 3.1 million barrels per day. In addition, IEA projections predict that demand growth will slow down in the 2nd and 3rd quarters with the global tightening cycle and inflation, while total demand may decrease in the 4th quarter. Brent closed last week at $98/barrel level and WTI below $92/barrel level.

Germany, the largest economy in the Eurozone, caught in the midst of energy wars, reached its goal of bringing its natural gas stocks to 75 percent fullness in order to become independent from Russian natural gas, weeks ahead of its planned date. According to data from European energy operator GIE, natural gas stocks in Germany reached 75% on Friday at an underground storage capacity of 23.3 billion cubic meters. In 2021, Germany consumed a total of 100 billion cubic meters of natural gas. The price of the European benchmark gas TTF has doubled in just 6 months, rising above 200 euro/Mwh, as Russia used gas flows to the EU in retaliation against post-Ukrainian sanctions. TTF was around 20 Euros in January 2021 and has increased 10 times in 1.5 years.